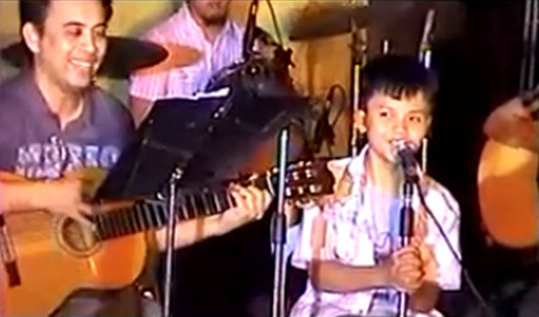 Child with Hydrocephalus [Testimonial written by his aunt, Iya Pagui-Yazon]

OJ has been born with Hydrocephalus. He also has poor eyesight. Also, as of his last assessment, he has the mental age of a 6 year old. Consequently, although having years of therapy, he has not been able to read or write. On the other hand, we had noticed his keen sense of hearing and he has often been observed to hum tunes from songs, commercials, and jingles heard on TV and radio.

That’s when we decided to enroll him in Teacher Jojo’s summer class. It was an amazing transformation. Although he was hesitant at first, Teacher Jojo made him feel at ease immediately. He could be seen smiling and giggling as tunes were played from Teacher Jojo’s piano and guitar. OJ loves to sing. He even had a practice microphone at home so he could make believe that he was singing in front of an audience. He enjoyed his lessons with Teacher Jojo so much to the point that he was sad whenever it came time for the sessions to end.

We were all teary-eyed during his performance during the summer recital. We couldn’t imagine in a million years that here was a boy without the ability to read and write, with bad eyesight and poor coordination, in front of a crowd of strangers, and singing his heart out, accompanied by a full band. It is truly a dream come true for OJ. It can only be attributed to Teacher Jojo’s knack for digging up one’s love for music in even the seemingly hopeless cases and letting it grow and finally come to bloom.